A collision filter composes of a category and filter layer mask. A layer mask is a 64-bit bit flag value. Each bit can be individually set or cleared. 64 bits should be enough for the most complex filtering problems. Layer masks match each other if they share one or more set bits. Layer masks with no bits set do not match other layer masks even if they have no bits set either.

The category usually denotes what kind of type a collider belongs to. Typically this has only one bit set but more complex configurations are possible. For example it is possible to have disjoint groups of bits. A category could then have one bit set from each category.

The filter denotes which bits in the category of another collider have to be set for a collision to be possible. The filter typically has many bits set and states which categories can collide.

Category and filtering are compare between two colliders to determine if a collision is possible. The category layer mask of the first collider is matched against the filter layer mask of the second collider and vice versa. If both comparisons result yield a match a collision is possible otherwise not. This system allows for all kinds of complex scenarios. The image below shows an example scenario to visualize the working of filtering. 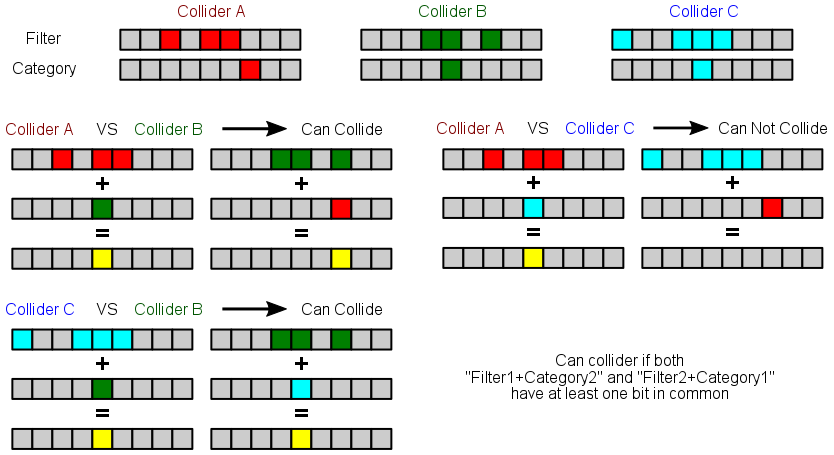 The example below sets up the situation in the image.