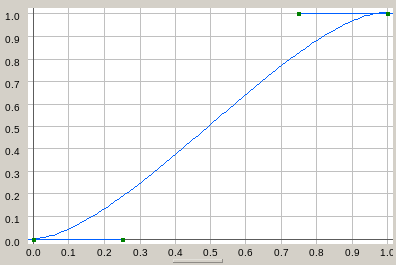 Bezier curves are 2D curves mapping an input value to an output value.

The point defines the location of the curve point (X coordinate, input value) and the output value (Y coordinate).

The two handles define the shape of the curve in the neighbourhood of the point. The first point is located to the left side of the point (leading in handle) and the second handle is located on the right side of the point (leading out handle). If the handles and the point are co-linear (all three vectors can be joined with a continuous line) then the curve has first order continuity (smooth corner). If the distance between the two handles and the point is also identical then the curve has second order continuity (smooth corner and smooth curvature change rate). Otherwise the corner is pointy and has zero order continuity.

Constant interpolation forces the output value of each curve segment (the section between two curve points) to the Y-coordinate of the the curve point on the left side of the segment. The value then jumps immediately to the Y-coordinate of the next segment when arriving at the right curve point. In this mode handles are ignored. This mode is best suited for switching type mapping where the output is constant across curve segments. In this mode handles are ignored.

Linear interpolation blends linearly between the left and right end of a curve segment. All corners are pointy. In this mode handles are ignored. 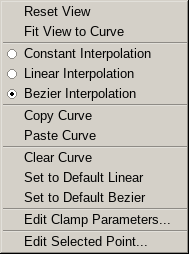 The context menu allows to edit the curve as well as setting some parameters.

Fit View to Curve adjusts the X-axis and Y-axis extends to fit the curve into the view. In particular this sets the X-axis range to include the first and last curve point X-coordinate as well as the Y-axis minimum and maximum set to the curve point Y-coordinate minimum respectively maximum value. Handles are not included in the curve fitting only curve points.

Set to Default Bezier sets the interpolation mode to bezier interpolation, removes all curve points and adds two curve points producing an S-shaped curve starting at (0,0) and ending at (1,1). This is similar to a GLSL smooth step curve running from (0,0) to (1,1).

Edit Clamp Parameters shows a dialog to edit the clamping parameters. If clamping is enabled curve points (not handles) are clamped to the desired range while dragged using the mouse. Clamping is not applied to existing points if changed nor to manually edited points.

Edit Selected Point shows a dialog to edit the point, first handle and second handle of the selected curve point.