Occlusion culling is an important feature of a game engine. Although graphic cards become faster and more powerful they still struggle with complex scene filled with many objects. One possible solution is to reduce the complexity of object at a distance using LOD Systems. But even with the best LODing the number of triangles rendered in a scene explodes with the scene complexity. A good example is a city scene where lots of buildings and props are located one behind the other. To render such a scene effective invisible objects have to be skipped. Calculating though which objects are invisible is a difficult and time consuming task. The Drag[en]gine provides the artist with a possibility to help the Graphic Module to figure out hidden elements without much extra work. For this purpose occlusion meshes can be used.

An occlusion mesh is an extra resource object defining a low polygon mesh blocking the view. Each face in the mesh marks a view blocking polygon in space. In contrary to model resources resources occlusion meshes can be composed of faces with more than 3 corners as long as all corners of the face are coplanar. Faces can be double sided or single sided. By default faces are double sided.

Faces are not required to share vertices nor are they required to connect to each other or to defined a closed manifold mesh. You are free to place faces in an occlusion mesh the way you see fit. For most models creating the occlusion mesh is fast as it contains only a handful of faces taking no time to create.

A double sided face blocks the view from both directions. This is the choice for walls of any kind. Use double sided also for faces on room walls where no geometry is located outside. The reason is that Graphic Modules can decide to use occlusion meshes also for shadow casting optimization and missing a double sided face on such walls can result in unexpected behavior.

On the other hand single sided faces block the view only from the front side. The front side of the face is the side where the normal is pointing at you. From the back side the single sided face does not block the view. This can be used for situations where a texture blocks the view only from one side but not the other. An example would be a police interrogation room half-mirror window where you can see the inside from the outside but not vice versa. Using a double sided face the objects in the inside can be incorrectly culled.

For the time being the export script does not support the new N-Gon polygons included in Blender since 2.65 . Hence for the time being only 3-4 corner faces can be exported. N-Gons will be ignored. This will be fixed later on.

Blender materials for use with occlusion meshes. If you have no single sided faces you can use only the left material. 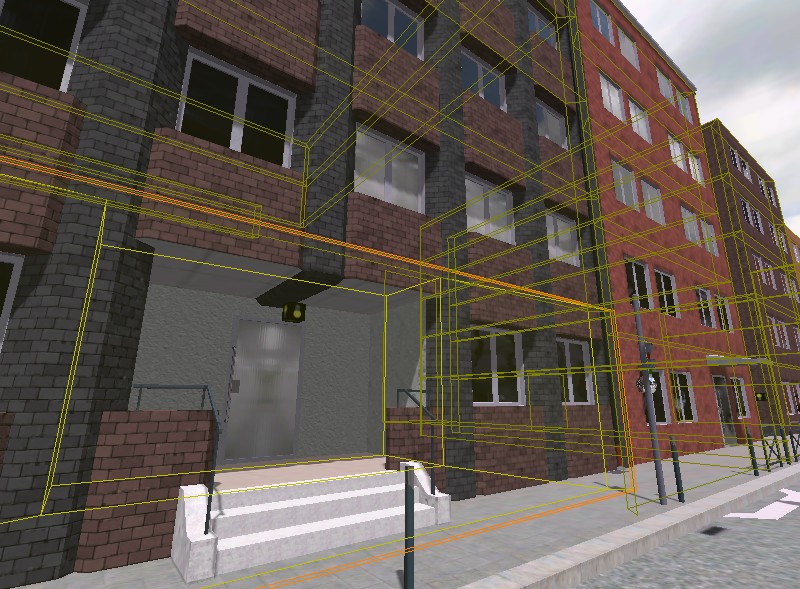