The Blender DEMoCap Tools Addon simplifies the process of importing motion capture animations created by DEMoCap. Both free captures as well as exported captures are supported.

Install first the Drag[en]gine Blender Export Scripts. This Addon uses the import functionality of those scripts.

The addon scripts can be installed using the typical Blender3D workflow for installing addons.

You can download the zip file from: https://github.com/LordOfDragons/democap/releases/latest, file blender-democap-tools-*.zip where * is the version number.

Click the “Install” button and select the plugin zip file.

Now a new toolbox panel is added with the title “DEMoCap Tools”. 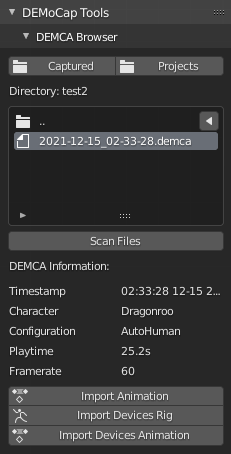 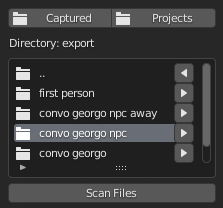 The DEMCA browser panel provides support to read those *.demca files and to import the contained resources easily.

The panel contains a file listing showing directories and *.demca files found in the current directory. After starting Blender or if you changed files on disk you have to press the Scan Files button to update the file listing. To switch directories press the left or right arrow button next to the directory list entry. To show information about a *.demca capture file select the file entry in the listing. The file information is read and displayed in the file information panel below. Use this panel to check if the motion capture contains the animation you would like to import.

Above the file listing are two buttons to jump to important directories.

The Captured button jumps to the captured animations directory in the DEMoCap capture directory. Free animations are stored into this directory. Free animations are captured if no Captured Character is selected while doing a motion capture. This is useful for doing quick captures like testing character configuration or doing motion captures that are not required to fit precisely into an existing environment. The directory is located here:

If you have a *.demca file entry select you can use the buttons below the file information panel to import animations.

If multiple captures use the same VR device configuration you have to import this rig only once.

This button can be used if the motion capture contains VR device capture information. Select the Armature imported by “Import Devices Rig” button. Depending on the playtime of the motion capture the importing can take a longer time to finish. Once the button is no more highlighted the import finished.

This import is quick and produces an Armature.

If multiple captures use object position and orientation you can use the same rig layout but you have to duplicate the object since each attached object needs a unique parent.

This button can be used if the motion capture contains object position and orientation information. Select the Armature imported by “Import Object Rig” button. Depending on the playtime of the motion capture the importing can take a longer time to finish. Once the button is no more highlighted the import finished.

The Correction Bones tools allows to post process motion capture data in a non-destructive way. Correcting bones has various uses, for example (including others):

To use correction bones you have to first add them to your armature. Enter Pose Mode and select the bones to add correction support to then press the Add Rot or Add Rot+Loc button.

For each corrected bone a bone constraint is added using the respective correction bone as input.

If the Add Rot button has been used a Copy Rotation bone constraint is added. The bone constraint is set to superimpose the local rotation of the correction bone onto the original bone in local bone space. This means you can rotate the correction bones to rotationally offset the motion captured animation. Use this for all bones which require only rotation to be modified. This is the majority of bones.

If the Add Rot+Loc button has been used a Copy Transforms bone constraint is added. The bone constraint is set to superimpose the local rotation and translation of the correction bone onto the original bone in local bone space. This means you can rotate and mvoe the correction bones to rotationally and translationally offset the motion captured animation. Use this for all bones which require rotation and translation to be modified. This is typically used for location bones like the hip or origin bone where the location of the bone is important.

The image below shows the process of adding bones to the Dragonroo example character. 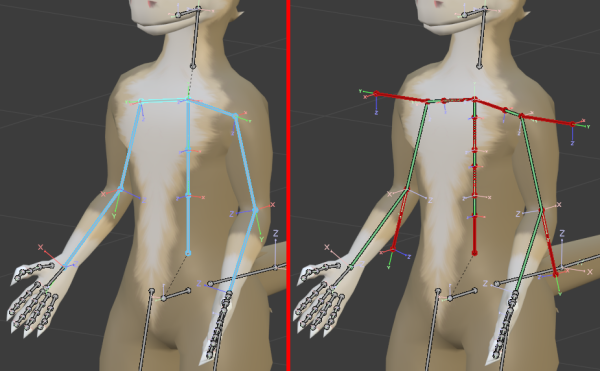 The image below shows how rotating spine correction bones offsets the animation without destroying it. 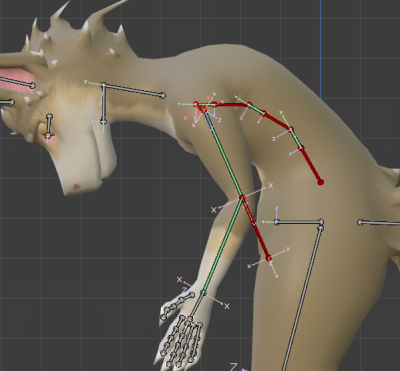 The typical workflow to create overlay motion capture animations is to align the first and last frame to the base animation. Optionally add keyframes at 0.5-1s after the begin and before the end with the rotation and location cleared. This way the corrections ensure the animation fits well over the base animation when blended into while the clearing ensures the animation playes unmodified after being fully blended in.

It is also possible to the aligning to match specific time positions inside the animation to an existing animation.