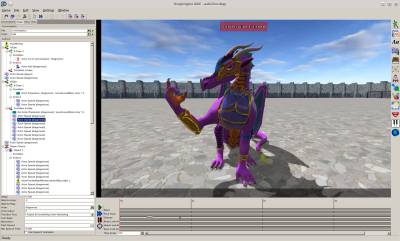 The editor window is composed of the preview area, properties panel on the left side and the dope sheet at the bottom of the window.

The preview window shows a preview of the conversation and this can be done in three different camera modes: conversation, camera view and free.

The free camera is the default and with it, the user is completely free to move around in a scene. See 3D-View Navigation on how to navigate the view using this mode.

The camera shot mode shows the currently selected in-game camera. This allows to set up new camera shots as well as previewing camera shots before deciding which one to use.

The actor sub-titles are shown at the bottom of the preview window. This is a generic preview subtitle setup and does not reflect how subtitles appear in the game (depends on script code and GUI themes used). This box shows the subtitle line of the last actor speak action that has been processed. Once the display time elapses the sub title is cleared.

To help frame actors better you can enable the rule of thirds overlay from the view menu. This is a set of transparent dotted lines superimposed on the view dividing it into 9 equally sized cells. A rule of thumb for better framing is to align the focal points of actors (their eyes) with one of the crossing points. 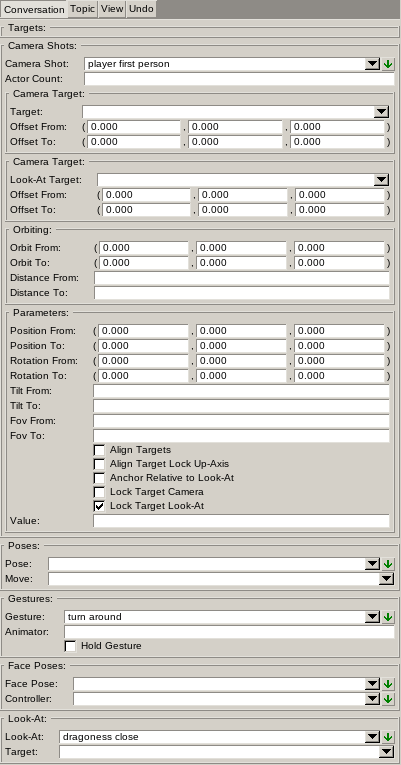 Targets are used in different places in the conversation to define a point in space. They are identified using a unique identifier. Targets have a Position and Orientation relative to the target. The orientation is applied before the position. Targets are relative to a Conversation Actor or a Coordinate System.

Using an Actor Index or Actor Name (matching either Unique Name or Alias Name) the target is relative to a conversation actor. The actor has to be present in the conversation for this target to work. If the actor is missing the position is set relative to the game world. If Bone is used the target position is relative to the specified bone in the actor. The name of the bone has to match the name of a bone in the Rig used in the actor in the game world. The game scripts can though apply a different logic to the meaning of the bone parameter for example using it as a type name to target a specific area on an actor. If the bone name is not understood by the game scripts the actor location is used as if no bone has been specified.

The Camera Shot Action defines the Targets used as camera target (gives the camera mount point) and look-at target. There are some additional parameters to alter this behaviour:

Defines a look-at usable in the conversaion. Look-Ats are identified using a unique identifier. Each look-at defines the Target it is using. Different look-at can point to the same target.

Defines a face pose to use on actors. Face poses are identified using a unique identifier. Each face pose has a set of Controllers indicating the blending of different facial states.

Defines a gesture to use on actors. Gestures are identified using a unique identifier. Each gesture has an Animator Identifier to be send to the game script to pick the right animator for use by this gesture. The interpretation of the animator identifier is game specific. The optional Hold parameter can be used to hold the gesture after the duration. If not set a gesture finishes after the duration it is played over. Using hold is required to create looping gestures that can be held until another gesture blends over it. 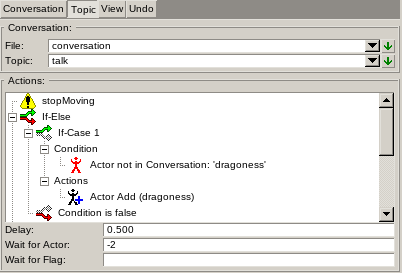 A topic is the actual conversation script played back by the game engine. Topic groups can have any number of topics. Conversation scripts are similar to movie scripts. They compose of Conversation Actions played back one after the other. In contrary to timeline based approaches the movie script based approach allows for better control of dynamic conversations where the actual length and spacing between actions can vary. Furthermore it makes modifying conversations easier since no re-timing or re-aligning along a timeline is required.

The Snippet text field contains the snippet to generate. Write it down similar to a simple movie script. Each line is converted to one Actor Speak action. The line begins with the identifier of the actor to speak and the text to speak separated by a colon character. The text to speak is set as the Text Box Text. If the speaking actor has also a speech animation assigned the text is converted to Words and added to the Word line in the Dope sheet. Any number of lines can be added this way. If the speaking actor changes a Camera Shot action is added using the parameters above. 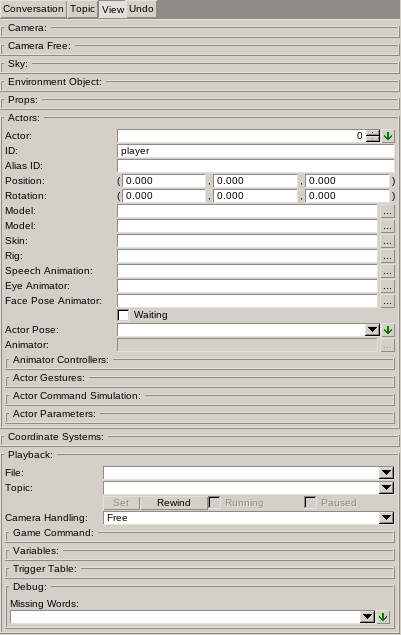 The Sky panel defines the Sky resource to use in the preview view.

The Environment Object panel defines the Object Class to use as environment the conversation is previewed in.

The Props panel allows to add props to the scene. This can be used to simulate the important aspects of a scene to ensure conversations are properly working, for example camera shot placements or ensure actors looking at props is working as expected.

The Actors panel allows to define the actors to play the conversation with. This panel contains a bunch of sub panels all defining aspects of the actor for example what model, skin and rig to use as well as the various animators to use. Dynamic behavior can be simulated using the Actor Command Simulation and Actor Parameters.

The Actor Command Simulation sub panel defines a list of actor commands supported by Actor Command condition. Use the context menu to add and remove entries from the list. Entries in the list show a minus or plus sign indicating if the command will return true or false if simulated. To switch the result of an entry in the list double-click MOUSE_LEFT on the list item.

The Actor Parameters sub panel defines parameters that can be checked using the Actor Parameter condition. Use the context menu to add and remove entries from the list. Adding an entry asks for the integer value the parameter will return if simulated. To change the value of a parameter in the list double-click MOUSE_LEFT on the list item.

The Playback panel controls the playback of the conversation.

The Game Command sub panel defines a list of game commands supported by Game Command condition. Use the context menu to add and remove entries from the list. Entries in the list show a minus or plus sign indicating if the command will return true or false if simulated. To switch the result of an entry in the list double-click MOUSE_LEFT on the list item.

The Variables sub panel defines conversation variables. These are typically set in game scripts to control the flow of conversation. Use the context menu to add and remove entries from the list. Adding an entry asks for the integer value the variable will return if simulated. To change the value of a variable in the list double-click MOUSE_LEFT on the list item. Here you can also see changes to conversation variables done by Set Variable actions.

The Debug sub panel contains some debug helper information. The Missing Words list shows all words used in all processed Actor Speak actions which are not present in the speech animation file assigned to the actor. Using the menu button the list opens in a new dialog ready to be copied for example to a bug report.

Setting up conversation test setups can be time consuming. To avoid repeating this process over and over again the setup stored in the Actors, Coordinate Systemes and Playback panel can be persisted to Conversation Test Setup files (*.dects) using the view menu.

You can also save the playback simulation states from the Playback panel to Conversation Test Game State files (*.dectgs) using the view menu. This includes the game commands, variables and trigger table.