The particle emitter editor allows to edit Particle Emitters for your game. 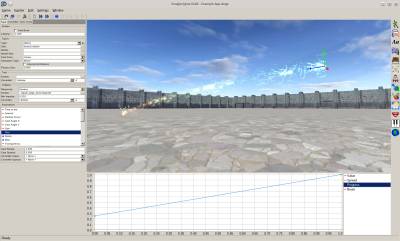 The editor window composes of the preview view, properties panel on the left side and the property curves on the bottom side.

The preview window shows the preview of the particle emitter. See 3D-View Navigation for how to navigate the view.

Each property has multiple curves that can be defined. Defined curves are marked with a plus sign, undefined curves with a minus sign.

The Value curve is used to calculate the property value at the time a particle is cast. The input of the curve is the Controller Value parameter from the Type → Parameters panel. The output is used as parameter value.

The Spread curve is used to calculate the spread applied to the property value at the time a particle is cast. The input of the curve is the Controller Spread parameter from the Type → Parameters panel. The output is added to the cast value (which can be from the above curve).

The Progress curve is used to calculate the property value of a cast particle relative to its lifetime. When particles are cast they are assigned a life-time (property value hence it can be dynamic). The input of the curve is the relative elapsed time since the particle has been cast (0 input value) and when it will die (1 input value). The output value is used as parameter value for the particle. If progress curve is used the value and spread curve are not used. 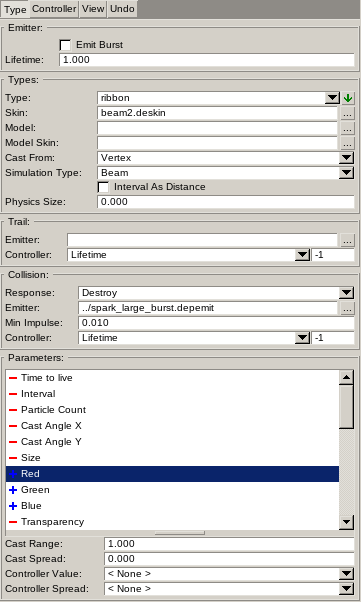 Particle emitters can have one or more Particle Types. Each type describes one kind of particles to emit with their own properties.

Sets preview parameters of the particle emitter and are not type specific nor saved to file.

The Lifetime defines the lifetime in seconds of particles in burst mode only. For regular particles the Time To Live parameter is used.

The Type parameter is the display name of the type. Use the button next to it to show a context menu to add and remove types.

The Skin parameter defines the Skin resource to use for particles of this type.

The Model Skin parameter defines the Skin resource to use for the cast model. This allows to modify casting behavior in greater detail using Skin Texture Properties.

The Simulation Type parameter defines what type of particles are cast. Supported are the tapes Particle, Ribbon and Beam.

The Particle cast individual particles vanishing after their lifespan elapses.

The Ribbon type creates one ribbon geometry composing of all cast particles in the order they have been cast. The particles thus define a path the ribbon follows. Ribbon type is typically used for trails or tracers.

The Interval As Distance is used by ribbon types. By default the interval parameter defines the time span in seconds between casting particles. If this parameter is enabled the interval parameter is changed to define the distance in meters between casting particles. This is used to make ribbons trailing behind moving objects. If the object is not moving and this parameter is disabled particles will be generated in regular intervals at the same location which can cause troubles. If enabled new particles will only be cast if the object moves a certain distance.

The Physics Size parameter defines the radius of the collision sphere assigned to each particle. The physics size is usually 50% of the visual particle size.

Assigns a particle emitter to be used as trail for cast particles. An example are explosion debris which have a smoke trail behind them.

The Emitter parameter defines the particle emitter to use.

The Response parameter defines how particles behavior colliding with other geometry. Supported are Destroy to destroy the particle and remove it, Physical Response to bounce particles physically or Custom Response to let game scripts calculate an appropriate collision response.

The Emitter parameter defines an optional particle emitter to use upon collisions. Emitter is used in burst mode.

The Min Impulse parameter defines the minimum impact impulse [Ns] before an emitter instance is created.

The Cast Range parameter defines the range of the cast value for newly cast particles. The cast value is randomly picked from between an including castValue-range → castValue+range.

The Controller Value parameter defines the controller to use as input for the Value Curve. If not set 0-input is used for the curve.

The Controller Spread parameter defines the controller to use as input for the Spread Curve. If not set 0-input is used for the curve. 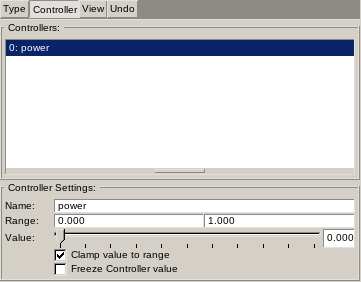 Controllers are typically accessed by the game developer using the unique Controller Name (case sensitive). This allows to mix and match different animators with differing controller setups (count, ordering and ranges) as long as the required names are present.

The Clamp value to range check box determines if the input value is clamped to the controller range or wraps around if going past the range.

The Freeze controller value is used only for preview purpose to stop a controller from updating its value dynamically. 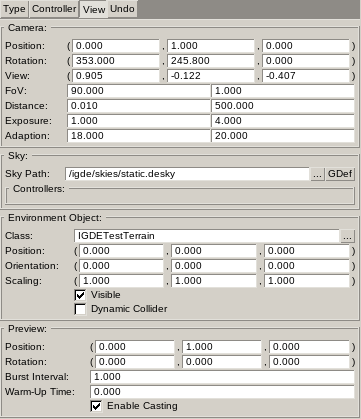 The Camera panel shows the parameters of the camera in the preview view. The values can be manually edited.

The Sky panel defines the Sky resource to use in the preview view.

The Environment Object panel defines the Object Class to use as environment the particle emitter is previewed in.

The Burst Interval defines the time in seconds before the preview particle emitter is reset. This is used on burst type emitters only.

The Warm-Up Time can be used to simulate an emitter in a running state. This avoids the need to wait for a couple of seconds to test emitters in running condition.

The Enable Casting enables particle casting. Toggle this on and off to check how the emitter behaves.