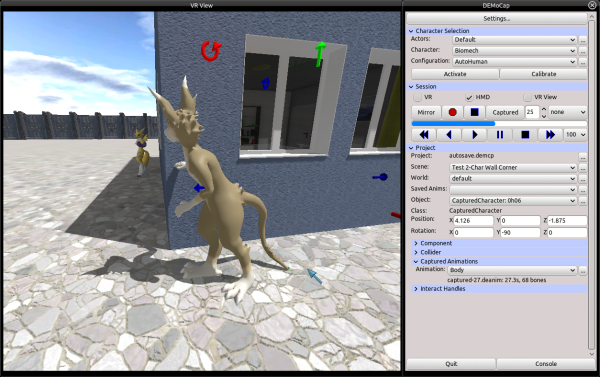 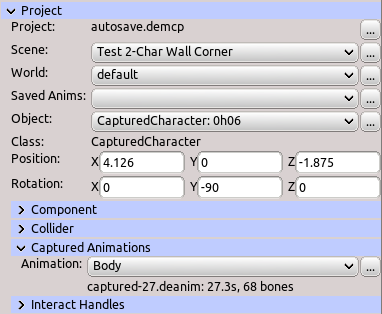 To do motion capture a project has to be present at all times. If no project is present the autosave project is used. You can thus always just activate and calibrate a character to do quick motion capture. The captures are written to the overlay captured animation directory. For serious motion capture projects it is recommended to maintain own projects.

To manage projects click on the … button next to the Project label edit field. The following menu buttons can be clicked:

Scenes store a specific capture scene. These are typically replicas of the game or cutscene scenes the animations are to be captured for. Scenes compose of a world and a list of scene objects.

The world file can be edited with the Drag[en]gine Integrated Game Development Environment (IGDE). This allows to set up a world up front and load it into a scene. The content of the loaded world is static and can not be changed. For dynamic content you have to use scene objects.

Activating a world removes all scene objects. If you do not want to loose your current scene make a copy first.

World files are stored globally in the overlay directory. Clicking the Browse Worlds button opens an operating system native file browser for the overlay directory. Place your pre-made world files in this location. Keep in mind what object classes DEMoCap does know and that the world file directory has the VFS path /content/worlds. Best practise is to put your world content inside a sub directory with the appropriate path used in object properties. If you want to use custom XML Element Classes place them in the same directory. DEMoCap scans /content/models and /content/worlds VFS directory trees for *.deeclass files.

Scene objects represent dynamic content. Scene objects can be selected and manipulated either by the motion capture operator or the actor from within VR. A new scene contains these default scene elements:

The area below the combo box shows Behavior Properties supported by the Object Class. Only the important properties are shown to not clutter the interface. These are the behaviors:

Each object with object class CapturedCharacter supports multiple Animation Slots. This allows to record multiple animations per character for example to animate additional limbs, tails, wings and more. You can only record into a CapturedCharacter with the same Character Profile as the actor is currently using. Different Character Configurations are used to capture the individual animations.

To save animations see above.

For using the captured animations in Blender or directly in the Drag[en]gine you are not required to export them. Internal animations are usage managed and are deleted if not used anymore. Exporting animations stores them in the export directory inside the project data directory and prevents them from being automatically managed.

Exporting animations shows an input dialog to enter a name. The name is used to write the files to the export overlay directory. The following files can be written: